A group of extraordinary Amish-Mennonite craftsmen settled near Johnstown and produced a unique variety of furniture that is still prized by collectors today. 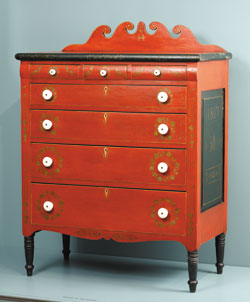 Between 1834 and 1928, a group of extraordinary Amish-Mennonite craftsmen produced a unique and distinctive style of furniture that is prized by collectors today. They developed their craft in a three mile long valley south of Johnstown, PA, called Soap Hollow, which was named for the manufacture of its most important product. Immigrants from Germany, the artisans were variously listed as "farmer", "undertaker", or "carpenter" in early census records. Undertakers were often carpenters as well in those days, since the deceased was generally laid out at home in a simple wooden casket. It is thought that most of the furniture was produced in the winter months, when farmers were not otherwise engaged, and was made for relatives, friends, and the families' own use.

Soap Hollow furniture differs from "Pennsylvania Dutch" furniture mainly in that it is less colorfully decorated, usually only with simple gold colored stenciled shapes and the name of the maker or initials of the owner appearing on the surface.

Colors are often a rich red, black, and dark green. Thick shaped skirts, backboards, and bracket feet, as well as diamond shaped keyhole escutcheons, are identifying features. The same patterns were used by the makers for generations, resulting in a remarkably consistent, recognizable style. Some craftsmen used a specific stencil shape, such as a horse, heart, or squirrel, to identify their pieces.

The earliest known and probably most prolific maker was John Sala (1819  1882). He is thought to have trained Christian C. Blauch and Jeremiah Stahl as cabinet makers, as well as his own two sons, John M. and Joseph Sala. Other known craftsmen include Peter K. and Nathaniel Thomas; Tobias, David K., and John K. Livingston; Peter Mishler; and Edward S. Schrock. Although most Soap Hollow furniture remains in the hands of private collectors, a chest of drawers attributed to Jeremiah Stahl is part of the collection of the Westmoreland Museum of American Art in Greensburg, Pennsylvania.