In the days before canning and other methods of preserving food developed, stoneware was found in every household. 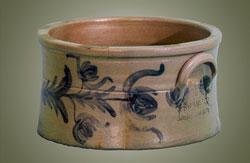 In the 1850s, Johnstown, Pennsylvania was a very busy place. One of its many small industries was the production of salt glazed stoneware crockery in a wide variety of shapes and sizes. In the days before canning and other methods of preserving food developed, these crocks were essential items in every household for the storage of liquids, butter, cheese, sauerkraut, and many other foods. Many have survived, and today collectors appreciate their sturdy, functional forms and charming hand-painted decoration.

Early potteries were established by Hamilton and Pershing, and A. J. Haws, but the most well-known was that of Jacob Swank and Co. In the early years, most pottery was made from locally sourced clay and thrown on a potter's wheel. Larger crocks and serving pieces were generally decorated using cobalt oxide, which produces the striking blue designs seen on this type of pottery. For strength, the clay pieces had to be fired at temperatures in excess of 2200 degrees Fahrenheit. After the kiln was fired for 24 to 48 hours, salt was introduced into the hot chamber through small holes in the kiln wall. The heated sodium vapors reacted with silica in the clay, producing a unique, rough "orange peel" texture on the surface of the clay.

Jacob Swank, his brother Hiram, and Hiram's sons continued to produce pottery under a variety of company names. As crockery became less necessary for food storage, they began to produce firebricks, nozzles, and other items for local refractories such as the Cambria Iron Works, eventually expanding to state and national distribution.